It's been another interesting day with the casino/events centre matter. There have been personal attacks on social media from members of Council directed at local business owners and the chair of one of our City's Business Improvement Areas.

But the back-and-forth online has dislodged a few interesting tidbits of information. In this recent post to the Valley East Facebook group, Councillor Kirwan writes that developer Dario Zulich is giving land to Gateway Casinos for free. 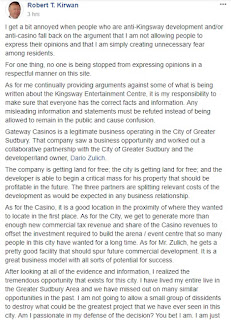 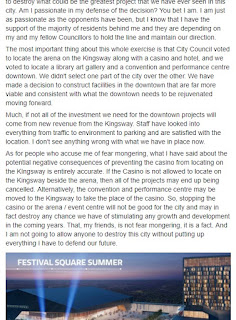 Free Land for the Casino - Who Could Ask For Anything More?

I didn't know that. I knew that Zulich and the City have entered into an option to purchase, where Zulich's lands will be sold to the City for $10 - close enough to free that I won't quibble. And we knew that Zulich had promised another 40 acre parcel to the Sudbury District Motorsports Association to add to their Crown parcel, should the MNRF ever decide to patent it (see: "True North Strong Centre Site of Future SDMA Race Track," Southside Story, undated). At the rate that Zulich appears intent on giving his land away, will there be enough left for him to make any profit?

Oh ya, that's right - he's going to hold on to the parking lots.

Keep in mind that the City had also offered up free land for the casino in 2013 - on the condition that the casino provide some additional amenity for the City.  So it looks now like the casino is getting the free land, and the City is providing the further incentive of locating a $100 million public facility next to the casino site.  That sounds like a sweet deal for sure - for Gateway Casinos!  The get free land and the they get out of the City's stated desire to create a public amenity.

Sing the Praises of this Bonus: It's a Great Business Model!

Anyway, I thought that was new. The Councillor here also writes about the 3-way deal that the City, Zulich and Gateway Casinos have entered into, which he refers to as being a "great business model". I'd call it something else completely, given that our tax dollars have been going towards concept plan drawings and technical studies to facilitate private development proposals that are at odds with our City's official plan. I suppose that disagreement is more a matter of opinion though.

City of Greater Sudbury Staff are All Satisfied. Good to Know

What isn't a matter of opinion, however, is the Councillor's claim that "staff have looked into everything from traffic to environment to parking and are satisfied with the location." To my knowledge, that just isn't the case.

The City's professional planning staff are currently reviewing land use applications that will permit a casino and events centre to locate on the Kingsway. They will be hearing from the public about this next week, and it is quite likely that information they receive through the public consultation process will inform their recommendation to Planning Committee.

Councillor Kirwan is again misleading those within his echo-chamber Facebook Group. The City's Planning Staff have NOT made any recommendation on these matters - so suggesting that they have no problem with the location is, at the very least, premature. It may be something else all together, though.

If anyone has the ability to participate in discussions in the Councillor's group, at the risk of being banned, you might want to ask him why he continues to mislead his group members about these matters.

The Ulterior Motives of Kingsway Critics!

And it looks like the letter from Susan Thompson, Managing Director of the Downtown Village Development Corporation, to Sudbury dot com has drawn the wrath of at least one member of municipal Council (see: "City accused of not following its own rules when it comes to new arena," Sudbury dot com, January 18, 2018).

In a disrespectful and petulant post to his echo-chamber Valley East Facebook group, Councillor Kirwan assures his reader that Thompson and others like her who oppose the Kingsway Entertainment District concept are doing so for no reason. Further, the Council member states that anyone who participates in the public process related to the land use applications is motivated only by the desire to delay the projects. 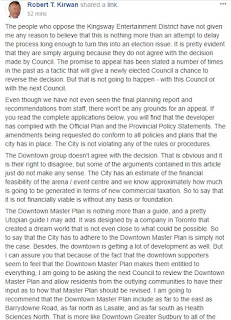 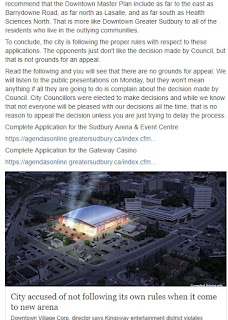 I can't help but note that the land use planning process is a public process that contemplates appeals of municipal decisions (and non-decisions) as part of that process.  Appeals on the basis of Official Plan conformity, or the lack thereof as implied by Thompson in her letter, constitute valid ground for filing an appeal, as per provincial legislation.  Of course, one make one's case at the appeals tribunal - but that goes for both an appellant as well as an applicant and/or an approval authority, like the City of Greater Sudbury.

This kind of fear-mongering and smearing of members of the public from Council members has just got to stop. To me it seems very clear that some members of Council are engaging in an orchestrated campaign to silence the public from speaking out about the land use planning applications currently before Council for a decision, as per legislatively-required public processes.  And it certainly seems as if this member of Council, at least, is completely dismissive of the land use planning process and the role that he, as elected official, is required to perform under land use planning legislation.

Punitive Action to be Taken Against the Downtown

But this next part is a real problem.

Councillor Kirwan is also stated that he will take punitive action against the City's downtown - the economic core of our community - by threatening to alter the boundaries of the downtown in an attempt to make the entire concept of a downtown meaningless. By introducing a motion to review not just the Downtown Master Plan, but the area that the City describes as the 'downtown' so as to water the definition down to meaninglessness is nothing short of malicious.  His complete dismissal of the Downtown Master Plan as an out-of-touch Toronto-produced document is so at odds with the robust public consultation process that led to the production of the Master Plan as to be insulting to City Staff and residents of the City of Greater Sudbury who worked together to produce this visionary document, meant to enhance the quality of life for all in our City.

This is just shameful and disgusting.  And it's getting out of hand. Can someone on Council please try to reign in their petulant, disrespectful colleague from Ward 5 before investors from outside of the City start noticing that he appears to have made it his personal mission to destroy our downtown?

(opinions expressed in this blog are my own and should not be interpreted as being consistent with the views and/or policies of the Green Parties of Ontario and Canada)
Posted by Sudbury Steve at 4:45 PM