On Climate, the Times Are a-Changing

Three stories out of the United States this week offer hope to those concerned about the climate crisis.

Pope Francis visited the United States, where he interjected himself firmly into the 2016 Presidential election narrative.  After meeting with President Obama at the White House, Francis addressed both houses of Congress with what was surely for some Republicans, an unsettling message: our generation must be the one to take serious and responsible action to address climate change (see: “Read Pope Francis’ speech that he gave at the White House,” ABC News, September 23, 2015). While many Republican Presidential hopefuls continue to deny the reality of human-made climate change, they are increasingly finding themselves offside with an American public that understands how science works.

Earlier in the week, Democratic Presidential hopeful Hilary Clinton announced her opposition to the Keystone XL pipeline.  Clinton cited her belief that approving the pipeline, which would see dirty Alberta bitumen pumped to Gulf coast refineries, was not in keeping with the need to combat climate change (see: “Hilary Clinton breaks silence on Keystone XL pipeline: ‘I oppose it’,” the Guardian, September 22, 2015).  Clinton and Vermont Senator Bernie Sanders, the other Democratic frontrunner, have formed a united front on Keystone XL.

And, in what is turning out to be one of the worst corporate scandals of this century so far, German auto manufacturer Volkwagen was caught by the U.S. Environmental Protection Agency for installing “defeat devices” in their vehicles (see: “How a minor emissions experiment put Volkswagen in hot water,” the Globe and Mail, September 23, 2015).  The U.S. has some of the most stringent vehicle emissions standards in the world.  VW’s defeat devices were used to trick emissions tests, allowing as many as 11 million vehicles to emit hundreds of thousands of additional tonnes of nitrous oxide - a potent greenhouse gas. Consumers who turned to VW for a “greener” vehicle purchase are up in arms (see: “Overview of Greenhouse Gases, Nitrous Oxide,” the United States Environmental Protection Agency). Since the scandal broke, Volkswagen has lost around US$28 billion of its market value (see: “Volkswagen emissions scandal – as it happened on Tuesday,” the Telegraph, September 22, 2015).

As Bob Dylan sang about a different shift of perspective that washed over America in the 1960s, ‘the times they are a-changing’.  In the lead-up to critical international climate negotiations in Paris this December, a new sense of optimism is in the air, thanks to what’s happening south of the border.

The United States of America is the world’s foremost economic powerhouse.  Where the U.S. leads, other nations are often forced to follow.  If the U.S. chooses to take the Pope’s exhortations to heart and begin the process of vigorously decarbonizing its economy, climate laggards like Canada may have little choice but to do the same – or potentially face retaliatory border tariffs for exports that don’t have built-in costs for carbon pollution.  The choice may become one of getting with the program, or paying the price for our obstinacy.

The sheer size of the U.S. economy means that if anyone wants to sell a product in the States, they’re going to have to follow U.S. rules and play ball with regulators.  While some multinational corporations like Volkswagen might try to game the system to their advantage, as VW is now finding out, scandalous corporate trickery can have multi-billion dollar consequences.  Major corporations will now think twice about playing similar games with the EPA.

President Obama visited the front lines of the climate crisis on a recent trip to Alaska.  As Air Force One over-flew the island of Kivalina, and the President had a chance to see first-hand how the rising ocean is slowly swallowing the island – along with its human inhabitants (see: “Obama Takes on Climate Change: The Rolling Stone interview,” Rolling Stone, September 23, 2015).  In 2008, Obama claimed that his election to the Presidency signaled the moment when the rise of the seas started to slow.  While that hasn’t happened yet, Obama remains keen to leave behind a legacy of climate action.  It is widely expected that the President will show an iron resolve to push forward a meaningful climate treaty in Paris.  Our children and grandchildren will benefit from his efforts.

Originally published in the Sudbury Star without hyperlinks, September 26, 2015 - print and online - as "Times are a-changing"

Posted by Sudbury Steve at 3:03 AM No comments: 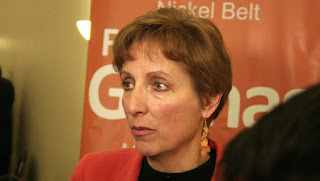 Whether one thinks that there may be problems with Ontario's proposed sex-ed curriculum or not, what is clear is that there are many who oppose the curriculum based on bigoted, and frankly, homophobic ideas. In this article, one of my fellow citizens, Paulette Bonin, is quoted as saying that she wants to protect children from "certain lifestyles" which is newspeak for homosexuality. That's disgusting to me, and it absolutely detracts from what otherwise might be legitimate concerns of those who oppose parts of the new curriculum.

It's also an embarrassment to my community that attitudes like this continue to persist in the year 2015.

What's also a real embarrassment, however, is my MPP tacit support for these bigoted protesters who were outside of her office on Wednesday. Instead of condemning their homophobic attitude, in her statement to the Sudbury Star, France Gelinas acts as their apologist, claiming that the Liberals brought this homophobic attitude on themselves because they failed to follow through on a commitment to consultation.

There are two things wrong with that. First, no level of consultation is going to ever change the mind of a bigot. France should know this.

Second, where our NDP MPP ought to be leading the condemnation of this backward attitude, she instead decides to use the episode to score cheap political points by bashing the Liberals - with whom she agrees with on the sex-ed curriculum by the way - instead of making a point to her constituents that bigotry and homophobia have no place in our community.

Posted by Sudbury Steve at 7:58 AM No comments:


Late last month, the world went crazy when it came to light that Cecil the lion was shot by American dentist Walter Palmer. Cecil was the popular black-maned lion at Zimbabwe’s Hwange National Park. Palmer’s guide lured Cecil outside of Hwange’s protective borders and onto a neighbouring farm where Palmer first shot Cecil with a crossbow before finishing him with a rifle. Both the farmer and the guide have been charged by Zimbabwean officials for hunting lions without required permits. Palmer fled to the United States where he has been the subject of public ridicule (see: “Zimbabwe’s ‘iconic’ lion killed by hunter,” BBC, July 27, 2015).

Protected animals are at significant risk due to poaching in Zimbabwe. Palmer apparently paid $56,000 for the pleasure of killing a lion – big money in Zimbabwe, one of Africa’s poorest nations (see: “Lion-killing dentist planned to take down anelephant next,” New York Post, July 31, 2015).

Yet, hunting lions and other large mammals isn’t illegal in Zimbabwe or elsewhere. Although permits to kill animals are sold by the government, Cecil's illegal slaughter is illustrative of how quotas are often exceeded despite the law.

The risks to lions, elephants, rhinos and other endangered species from poaching are exacerbated by climate change, which threatens the economic stability of poorer nations. Human development and a changing climate are also directly responsible for a loss of wildlife habitat. We are in the midst of a sixth great extinction event – one which rivals the mass extinction that wiped out the dinosaurs 65 million years ago.

“Elephants are a keystone species,” says Anne Belanger, Sudbury’s organizer for the International March for Elephants and Rhinos, taking place at Memorial Park on Saturday, October 3rd. “Elephants help assure the health of tropical rainforests by dispersing seeds. This in turn affects the global climate. There are no boundaries with climate change.”

Wildlife habitat loss due to drought is nothing new to Africa, where the frontiers of expanding deserts have been on the march for centuries. However, human-made global warming has been exacerbating desertification, and Africa is seeing more rich savannah lands quickly give way to arid sand dunes.

Desertification has been a particular problem in Africa’s Sahel region, home to shrinking Lake Chad – a large inland sea that provides fresh water to an estimated 68 million people.  Overgrazing, inefficient water use by humans, and climate change have been the primary culprits blamed for Lake Chad’s loss of volume – estimated to be about 95% between 1963 and 1998 (see: "Lake Chad," Wikipedia). The shrinking lake has been a disaster for local economies and for the wildlife within the lake's ecosystem.

The international community has committed to reversing the sixth great extinction event through treaty agreements including the United Nation's Convention on Biological Diversity and the Convention to Combat Desertification. However, Canada pulled out of the UN's desertification Convention a few years ago, becoming the world’s only nation to have reneged on its treaty obligation to tackle droughts from a changing climate (see: “UN calls Harper government’s decision to pull out of anti-droughttreaty ‘regrettable’,” the National Post, March 29, 2013).

Here in Northern Ontario, our own threatened and endangered species, such as the woodland caribou, continue to be placed at risk. Changes made to the Endangered Species Act in 2013 now permit industry to destroy the habitat of threatened species in the name of economic development (see: “Ontario Has Given Up On Endangered Species,” Anna Baggio, Wildlands League, the Huffington Post, January 23, 2015). A recent decision by Ontario's Divisional Court, brought on by a challenge made by environmental organizations on behalf of endangered species, upheld Ontario's habitat-destroying regulations (see: “Statement on Divisional Court on Ontario’sEndangered Species Act,” Wildlands League, May 29, 2015).

More must be done to protect biodiversity and the habitats of threatened and endangered species. Yet we continue to push wildlife to the edge of extinction. Within the next decade, elephants and rhinos may cease to exist everywhere outside of zoos. While we acknowledge that more must be done to protect at-risk species, Ontario and Canada are clearly failing to demonstrate the leadership that the world needs right now – before it becomes too late.