Ontario’s new Climate Change Action Plan has drawn a lot of fire since it was released this past June (see: “Ontario Liberals unveil $8.3 billion climate plan to mixed reviews,” the Toronto Star, June 8, 2016).  With almost stunned disbelief, critics have focused on the Plan’s level of ambition, claiming the $8.3 billion Plan will do too much too quickly, irreparably damaging Ontario’s economy in the process (see: “Is Wynne’s green plan creative destruction or political suicide?” Tasha Kheriddin, iPolitics, May 16, 2016). 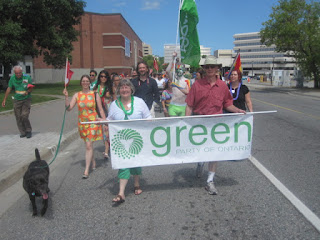 I say that’s nonsense. There’s a lot to be critical of, but the Plan’s ambitiousness certainly isn’t high on the list – not when the compared to the response demanded by the climate crisis. Instead of a systems-wide response to the crisis, our Liberal government has created a plan to do more planning – with implementation timeframes that stretch in some cases beyond their current mandate.

Don’t misunderstand me – there are some really good ideas in the Climate Change Action Plan which should lead to actual emissions reductions while simultaneously investing in communities.  The Plan’s focus on the transportation and buildings may very well kick-start long overdue transformations if critical actions are implemented. Supports for the sale of electric cars and changes to the Building Code to require Net Zero building envelopes here come to mind.

But the Plan falls flat when it comes to providing the kind of incentives that will really change consumer behaviour, largely due to its unambitious starting point.  Environmentalists and economists have long agreed that the most efficient and cost-effective way of reducing greenhouse gas emissions is to put a price on carbon pollution.  Ontario’s Liberal government is finally going to start pricing carbon, but through an expensive cap and trade scheme that allows the government to play favorites, picking and choosing winners.  That approach might be a good one if your goal is to maximize photo-ops for cabinet ministers, but it won’t lead to an aggressive reduction in greenhouse gas emissions.

Ontario expects its $17 per tonne price for carbon pollution to slowly increase over time, leading to reduced emissions and more revenue for the province to re-invest in green initiatives (see: "Cap-and-trade's real cost," Lorrie Goldstein, the Toronto Sun, May 21, 2016). Unfortunately, carbon markets elsewhere, including California, Ontario’s Western Climate Initiative partner, haven’t managed to rise to the occasion (see: "California's cap-and-trade program faces daunting hurdles to avoid collapse," the Los Angeles Times, June 14, 2016).  The culprit has primarily been governments who interfered in their own markets by giving away carbon allowances to select industries, leading to market stagnation or collapse.  Economics 101 teaches us that the prices aren’t going to rise when you flood the market with free goods.

Already, the Ontario Liberals have publicly expressed concerns that their Cap and Trade scheme may not  live up to revenue projections (see: “Ontario Liberals rethink $1.9 billion cap-and-trade projection in uncertain market,” CBC News, June 4, 2016).  Since the Climate Change Action Plan will be primarily funded through Cap and Trade, there’s already considerable doubt whether enough money will be available to implement all of the Plan’s undertakings.

Ontario could have opted for a straight-forward tax on carbon pollution, collecting it at the source of emissions.  This approach would have guaranteed revenues for the government, and cut out the traders, bankers and lawyers who stand to be the biggest winners with Cap and Trade. Of course, a straight forward carbon tax wouldn’t allow the government to play favorites with industry friends like Fiat Chrysler, which recently received an $85.8 million incentive to produce a hybrid mini-van in Windsor – something that Fiat Chrysler might have done anyway if consumers were demanding low-carbon vehicles because of high carbon pollution costs (see: “Ontario premier says $85.8 million grant for Chrysler is not corporate welfare,” Global News, June 15, 2016).

A $50 per tonne carbon fee collected by the government and returned to consumers might have been incentive enough for industries to transform their own business models, while leaving consumers with money in their pockets after making greener choices.  Of course, pricing carbon pollution at anywhere near its actual cost to society would require a level of ambition that Ontario just isn’t ready to demonstrate. We’ll continue to fiddle while the planet burns.