Jane Jacobs’ Urban Vision Coming to a City Near You

Had urbanist Jane Jacobs lived to be 100, she would have celebrated her birthday earlier this week. Jacobs, a journalist by training, was a champion of people and cities and helped shape the urban realm during the latter part of the last century.  Her influence on place-making is even more poignant today, as cities across the continent begin retrofitting as part of a shift towards the low carbon economy. 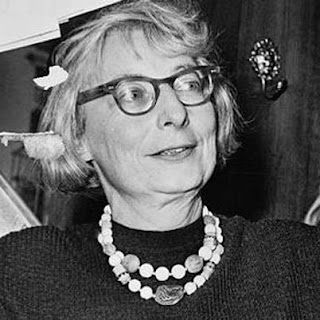 In  “The Death and Life of Great American Cities”, Jacobs made the case that the best places to live are the ones scaled to people.  At the time of its publication in 1958, North America was in the midst of a highway building boom which would not taper off until her ideas eventually became mainstream in the 1980s.  Today, we take it for granted that great cities are the realm of people, not cars (see: “How Activist Jane Jacobs Changed the Way the World Thinks About Cities,” Annalies Winny, Vice.com, March 10, 2016).

And yet, although we understand the lessons Jacobs taught, we have largely continued to comprehensively ignore them in the design of our cities and suburbs.  Too often, municipal decision makers continue to emphasize a car-centric vision for urban design, rather than one where our communities are built at the scale of walking and cycling. New cookie-cutter subdivisions, often located on the fringes of existing built-up areas, are serviced by needlessly wide streets that make getting around without a car difficult. Big box “power centres” are built with enough parking to accommodate what U.S. urbanist Marc Lefkowitz refers to as the “100 year shopping event” (see: “Who will (and won’t) pay for water-polluting lots,” Marc Lefkowitz, GreenCityBlueLake, April 28, 2016).

For Jane Jacobs, and for many others who have flocked back into our inner cities, the suburban built form proved not only to be spiritually desolate, but also economically unsustainable.   The social and economic costs of commuting great distances to work have required private and public investments in infrastructure that have left many people and cities teetering on the edge of insolvency.  It may be true that land values are generally lower in suburban areas, making those areas more attractive to home buyers, but the additional costs associated with suburban living often tilt the balance in favour of inner-city dwelling, especially in circumstances where a family chooses not to own a car.

As we shift towards a low carbon economy, we are already seeing our governments and businesses beginning to back the transportation options we’ll need to use to get around.  Light and heavy rail systems are being built or proposed in cities like Brampton, Hamilton, London and Kitchener-Waterloo. Separated busways already exist in Mississauga and Ottawa.  Transit not only helps reduce greenhouse gas emissions, it also facilitates the type of urban built-form that makes our cities vibrant, people-centred places.

Not everyone will choose to live in our retrofitted cities.  That’s fair, but it might prove to be more expensive in the future, once pollution and congestion pricing programs become the norm. For too long, we’ve subsidized suburban living through artificially low energy prices and other fiscal breaks for car owners, including building and maintaining our expansive road and highway systems, and providing low cost storage options for vehicles through free parking.  Our subsidies have led to inefficient urban sprawl, a development form which typically does not offer a positive return on investment.

Jane Jacobs has shown us what makes cities great.  In our shift towards a low carbon economy, we’ve already started knocking down some of the barriers we’ve erected to prevent creating people-centred urban areas.  In the future, our cities will be more compact, less focused on cars, and more economically sustainable.  That’s all good news – but the great news is that as a spin-off, we’re going to create more vibrant communities for people.

Posted by Sudbury Steve at 12:35 PM No comments: