There are a lot of good ideas in the Ontario NDP's recently released "Green New Democratic Deal".  With a few exceptions, the NDP has checked just about every box that a political party should be checking if they are interested in developing a credible climate change plan.  With my quick 20-minute review, I only noticed two glaring omissions: there are no calls to extend more protections to wetlands or to the habitat of species at risk.  Not sure why the ONDP left those things out, as they have in the past been champions for protecting wetlands (species at risk is a bit of a different matter).

The "Plan" sure is light on details.

The centrepiece of the Plan is a new Cap and Trade scheme that will replace the federal backstop.  Yes, Cap and Trade is back again - and about as welcome to me as Richard Nixon putting in another appearance.

But at least it appears that the NDP will take some time to work out the details after it gets elected, leaving voters to wonder just what they're in store for when they head to the polls.  The "plan" indicates that there will be a good deal of consultation with stakeholders before it ever gets set up.

And that's very disconcerting, considering that three quarters of the $40 billion that the NDP wants to spend will be coming directly from the proceeds of Cap and Trade. $30 billion in new revenue is projected to come from Cap and Trade scheme, and $10 billion from Green bonds. Is that realistic?

At the time of cancellation of the Liberal's Cap and Trade program in 2018, projections were that the province would be foregoing $3 billion in revenue over 4 years (see: "Premier Doug Ford’s cap-and-trade move will cost treasury $3B over four years," the Toronto Star, October 16, 2018). Now, the vagaries of any cap and trade program are such that it's hard to know, exactly, how much revenue a program is going to pull in until the cap is set and the auction begins. But let's assume the numbers reported in 2018 are correct: the former program would have generated $3 billion in revenue for Ontario.

But the NDP says their program will generate $30 billion over 4 years - 10 times as much. Which suggests that the cap put on emissions is going to be much tighter, leading to a much higher per-tonne cost for carbon pollution.

Of course, the NDP's plan doesn't say what per tonne cost they're aiming for (all of this will be left for some sort of commission to discuss). But let's say it's 10 times the amount that was being charged under the Liberal scheme, just to stick with the 10 times increment (and I know, that's a big assumption, because it might not need to be that high - or even at 10 times the cost, it still might not generate that level of revenue, it might need to go even higher). The Liberals were getting about $17 per tonne of emissions. Which means the NDP would be looking at $170 per tonne.

$170 per tonne just happens to be what the federal carbon price backstop will rise to in 2030.  $170 per tonne still might not be high enough to capture the real costs of pollution, but it's nothing to sneeze at either.

It's a good price. But the NDP also says that they don't want "the little guy" to get hurt via carbon pricing. And that's where everything in the Cap and Trade Ponzi Scheme completely breaks down. At $170 per tonne, you can bet that the additional costs endured by industry will be passed on to consumers. We just won't see it happening transparently (another big issue with Cap and Trade). But we're all going to get hit by those costs.

Under the federal backstop, we'd get hit by the costs, but most of us would come out ahead, thanks to the dividend that's rebated to consumers through income tax deductions.

In the NDP's new Ontario, we're all going to take a bath thanks to higher production costs that will be passed on - but there's nothing there for consumers (or very little - sure, there'll be some programs we can apply to for some stuff - but every day people - especially the most vulnerable, including those who rent are going to be hurt most of all).

Honestly, I don't think the NDP actually contemplate seeing their per tonne carbon price rise to $170 a tonne. And I don't believe that there's any way that a lower carbon price is going to drag in the $30 billion in revenue that the NDP is banking on. Their numbers (and there aren't many of them in the plan) don't appear to be realistic. In fact, they appear to be completely unrealistic - at least on this critical issue of "where is the funding going to come from?"

Remember: the only way to achieve a reasonably high carbon price without leading to rioting in the streets is to give revenues back to consumers - just as the federal Liberals are now.  The ONDP's Cap and Trade scheme won't do that - so it will either fail because it will have a negligible impact on reducing pollution because the per tonne price is too low (as they've discovered in California; after years of working under Cap and Trade, emissions have actually risen), or it will work to make goods and services too expensive for consumers.

But again, I don't really believe the NDP has costed their plan. I don't think they've really given much thought to any of this. I think they made a political decision to go with Cap and Trade, because the Liberals are likely to go with a carbon tax (or to keep the federal backstop in place - because it's working, and will be working even better as the per tonne carbon cost rises).

So, Ontario NDP, prove me wrong. Show us all your math. Because right now your "Green" New Democratic Deal looks like it's covered in fudge.

Posted by Sudbury Steve at 6:20 PM No comments:

Greens Need to be Realistic About Upcoming Federal Election - and Beyond

I realize CBC's Eric Grenier is focused on the NDP in this piece - but behind the words we see some serious issues for the Green Party of Canada (see: "Singh's NDP could gain a little — and lose a lot — in a spring election," CBC, March 3 2021). While the polls have been mostly stagnate over the past year and a bit, the NDP did see a bit of a drop, and now appear to have regained most of what they lost and are back to numbers that they saw in the 2019 election - 19%, with some polls putting them a little ahead. 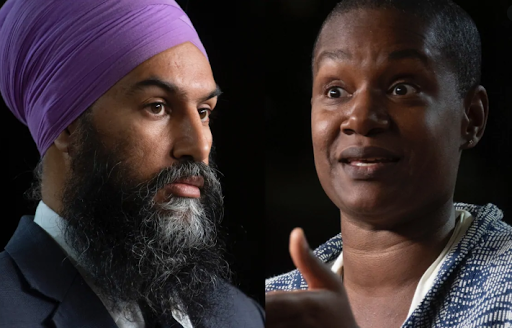 The Green Party continues to poll a little better than our 2019 record (5-6% in polls right now; but we were at around 8% pre-eday 2019 vs. 6.5% actual in 2019), but Greens need to keep in mind this rule of thumb with the polls: Greens always poll higher than our vote share. Always. So when I see 5%, I think 3%.
Given that the coming election is going to be fought on the basis of Trudeau, COVID and the economy - not exactly in our Party's sweet spot - and given that our Party leaders seem keen to want to go head-to-head with the NDP, the latest polls that show that same NDP on the rise - with our party mired in 5th place - maybe it's time for this sobering reality to start having an impact on our electoral strategy.
I'm not saying that we should think about pressing the 'panic button' (not sure what we could do at this point to change things around), but I am suggesting that maybe this election is one where we should focus on keeping our powder dry. Let's introduce our leader to the country, try to get our current MP's elected, and maybe add two or three more, somewhere, somehow. And let the chips fall where they may. If that means the NDP pick up a few seats, so be it.
But it also means that whatever the electoral outcome, our Party needs to stick with our current leader. That's the bargain we've got to make in an election where holding on to what we've got is the measure of success.
I look around the internet and I know that the knives are out for Annamie Paul. Her critics within the party and on its fringes are tearing her down. After some initial media successes, she's largely disappeared - and when she does pop up (as she did recently with the Olympics), she's hardly motivating the base (and indeed, she's turning some off - and giving ammunition to her opponents). She's been good on LTC, and if that helps her win in Toronto Centre, that alone would be awesome. But it's an issue which the NDP will always be perceived to be better than us on - which makes it a loser issue for Greens.
If you don't believe me, that's fine. I'm just some guy shouting from the wilderness. But look no further than what the other former leadership candidates will be up to in the next election. Howard, Kuttner and Murray have publicly said they'll be sitting it out. Rumours are out there that Merner might not run again. Lascaris? I'm not fan of his, but I know he's a smart guy - there's not much benefit to him right now if he has leadership ambitions to run somewhere and lose. West will probably run, because that's what West does. Haddad? Is she even still a Green?
Trouble is on our horizon. Let's hope that the campaign team understands this and decides to be realistic with its expectations. So far, I haven't seen a lot of that realism emerge, given the desire to compete with the NDP and the selection of Toronto Centre as the riding for Paul to run in. But I do hope they're getting the message that this is an important election for us - and getting wiped out across the country will not help further the Green Party or our movement.
Posted by Sudbury Steve at 8:08 AM No comments: