I often engage anonymous right-wing trolls at the Sudbury Star and Northern Life website's comments sections. While some of the online conversations that I've engaged in have been, to say the least, acrimonious, tonight I've experienced something which has never happened to me before. An anonymous poster who goes by the handle "Keebs" has accused me of being a liar. Keebs insists that I changed a post that I made this morning to the Sudbury Star letter to the editor "Interconnected Lakes Worsen Algae Bloom".

Mine was the very first comment made to that letter to the editor, and would have been published at approximately 7:15 AM.

In my comment, I wrote about the Experimental Lakes Area, which I said was located in "northwestern Ontario".

For a third time, Keebs insisted that I had written "Thunder Bay". Keebs wrote, "Your post read "Thunder Bay", hence why I replied to the "Thunder Bay" comment. Nice try."

My response to Keebs was the following: "Are you calling me a liar, you ridiculous anonymous troll?"

To which Keebs responded, "yes i am".

I'm not used to this. I've been called a lot of things in the comments section, and I have a pretty thick skin. Usually, the name-calling is related to an opinon. This time, it was more than personal. I suggested to Keebs that calling me a liar was slanderous - and I believe that doing so in a public form is a kind of slander.

I'm right about not having written "Thunder Bay". And I can prove it.

At 7:55 AM, I received an email to my hotmail account from Disqus, informing me that someone had replied to my online comment. A new comment from "Sensible_one" was made in response to my earlier comment. The complete text of Sensible_one's comment was provided directly to my hotmail account, as Disqus always does. Along with the complete comment from Sensible_one, Disqus also reproduces the first few lines of text of the original comment to which a response is made. In this case, I had identified the location of the Experimental Lakes Area as being within "northwestern Ontario" within those very same first few lines of text.

The email was sent to me at 7:55 AM, several hours before Keebs replied. I suppose that it's possible that Keebs could have read my comment between 7:15 AM and 7:55 AM, and chosen not to respond for a number of hours, and that between 7:15 and 7:55 I could have changed what I identified as the location of the ELA - but I didn't, and I know it. 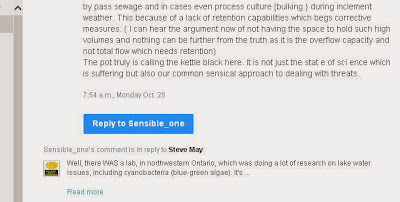 That's a screenshot taken from my email account. You can see at the top the last few lines of Sensible_one's comment, and the first few lines of my original comment, along with the Nickel Belt Greens avatar used by Disqus, which appeared today associated with my comment. I believe that this screenshot proves conclusively that I did not write "Thunder Bay" and that the accusation made by Keebs earlier this evening that I am a liar is completely unfounded.

I am growing tired of having to respond to drive-by smearings made by anonymous online posters. Too often, an excess of liberty is taken by these trolls who casually disregard the truth and resort to name-calling - sometimes serious and slanderous name-calling of identifiable individuals. I can't imagine that the Sudbury Star and Northern Life were aiming for this sort of discourse when they opened up commenting opportunities on news stories and other articles. The level of discourse is toxic at the best of times.

Perhaps it's time for the Star and Northern Life to end the practice of anonymous commenting. Other media have already done so (Scientific American) and some are now moving in that direction (The Huffington Post). I can't help but think that the level of engagement will only improve once people have to start taking ownership of their statements.