Time for NDP's Claude Gravelle to Turn Off the Lights

Since relocating to the Val Caron over a year ago, I’ve been bothered by a sight that I see almost every evening when I travel up MR 80 either on foot, bike or in the car. Up the road from where I live, our NDP Member of Parliament, Claude Gravelle, has a constituency office. In front of this office is a large orange sign, advertising the office location. Throughout the evening and well into the night on every single occasion that I’ve passed it by, this sign is lit – despite the office not being open to the public during these evening / early morning hours. 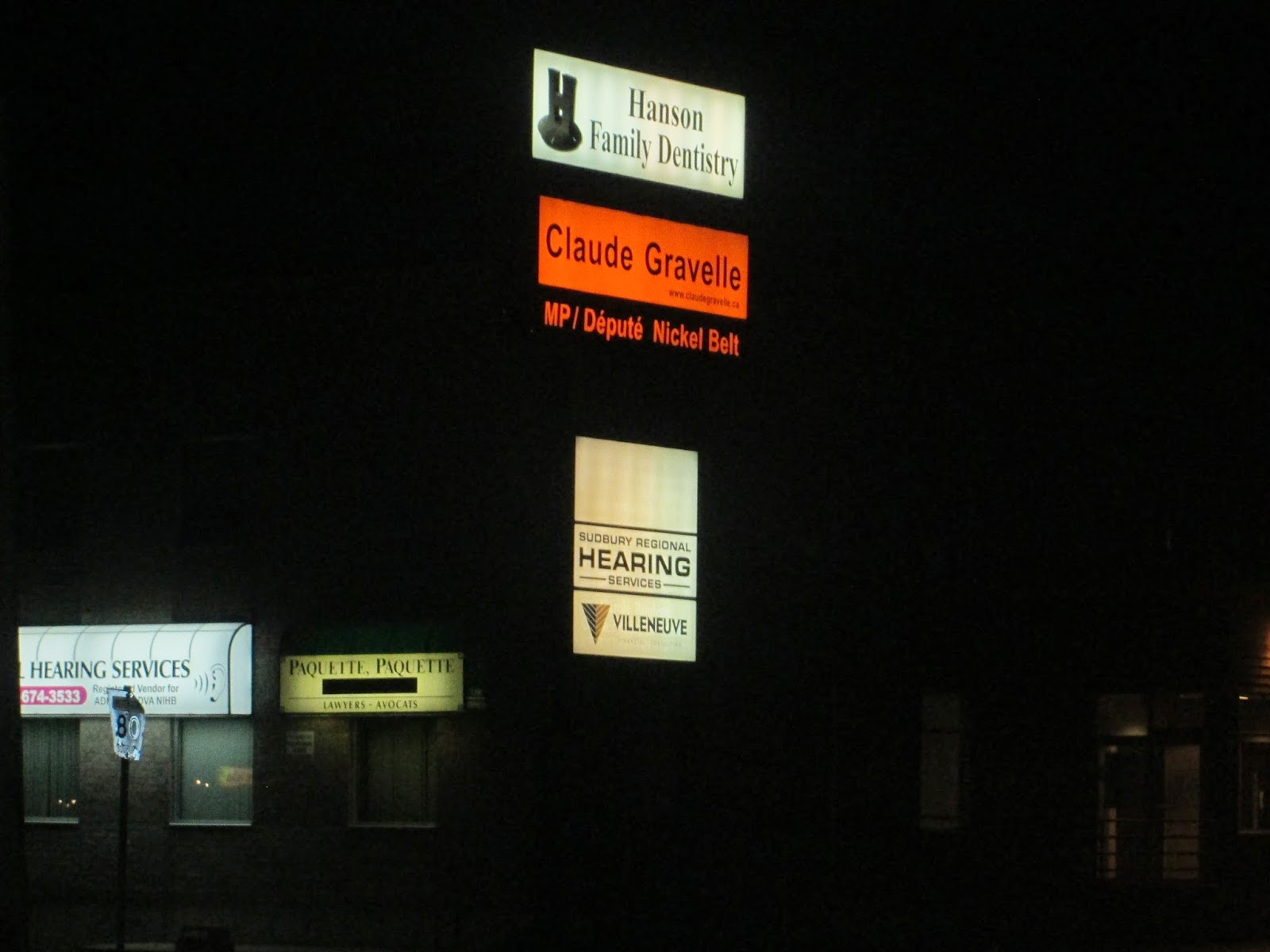 This past weekend, the federal NDP held its Northern Ontario Council Meeting. NDP Leader Tom Mulcair was in town, and both Sudbury NDP MP Glenn Thibeault and Nickel Belt NDP MP Claude Gravelle were nominated by members to carry their party’s banner in the 2015 election. The centre of focus of this sizable NDP gathering was a downtown Sudbury hotel – quite far from Val Caron – maybe a 20 minute drive away.

Yet the sign in front of Claude Gravelle’s constituency office was brightly lit, as seen in this photograph taken around 9 PM.

Why is it that I’m getting upset over a sign? Well, here’s a copy of a letter that I wrote to Mr. Gravelle almost three months ago about his sign. It pretty well sums up my concerns about the sign – and also alludes to broader concerns that I have about the NDP’s ability to take the issue of climate change seriously (more on that below).

In short, although the NDP wants to be seen as the only party capable of wearing a progressive mantle in the upcoming election, the NDP as a Party has far to go in earning the progressive moniker.

At this time, I’ve not received a response from Mr. Gravelle or his staff. Here’s my letter:

I note that, according to documents you’ve published on your website, your combined office expenses for leases, insurance and utilities for the year 2011-12 (the only year posted there) totalled over $29,000. Likely these expenditures on offices are similar to that of other years for which you’ve been serving the public. Funding is provided to you by the Government of Canada to maintain constituency offices for the necessary work that you do.

Given that public funds are being used to maintain your offices, I believe that it is incumbent upon you and your staff to ensure that value is being achieved at all times, and that opportunities to reduce and eliminate waste are explored comprehensively, and reviewed over time. To that end, I sincerely hope that you will put an end to your practice of using electricity to light your office sign during times when your office is not open to the public.

While I understand that the costs of electricity use for your sign may not be a significant percentage of funds spent in terms of your overall annual office budget, the fact is that every little bit of savings helps, especially when it comes to using tax dollars wisely. As there can be no need for a lit sign when your office is closed, it seems appropriate to save money and switch the sign off.

Further, our elected officials ought to be doing what they can to be real leaders in promoting energy efficiency, particularly now that the perils of the climate crisis have become so very apparent. A sign lit by electricity belonging to a publicly elected official’s office, turned on even at times when the office is closed, could be interpreted as a profligate use of energy.

To that end, I urge you to please consider conserving public dollars and energy. Could you please turn off your constituency office’s sign when your office is not in use?

Thank you for considering this request.

Look, turning out the lights is a pretty small issue in the grand scheme of things. But to me, it’s the little actions (or lack thereof) which starts to speak volumes about how the NDP remains disengaged on climate change. If they were serious at all about wanting to do what’s right for the planet, each and every MP would make sure that the lights are turned off when they’ve left the building.

If the NDP gets the little things wrong, what about some of the bigger things? In Sudbury, the NDP’s critic for Consumer Affairs, has been pushing a campaign to make driving more attractive, under the guise of ending gasoline price gouging. On his website, Thibeault remarks that “Over the past six years, the price of gas in Sudbury has shot up from an average of just over $1.00/litre to now over $1.40/litre. And there appears to be no end in sight.” (as per this website)

Well, no kidding, Glenn. What’s been driving the hikes to gasoline prices sure isn’t collusion or gouging on the part of the oil industry – it’s the fact that we are running into resource limits for inexpensive energy, and that we are increasingly deriving more of our fossil energy from non-traditional sources, including deep water sources, fracking and the tar sands. These non-traditional sources of energy are more expensive to access – and with a growing demand in places like China and India (nations to which we’ve outsourced much of our industrial plant), we here in Canada can only expect prices to continue to climb.

But the NDP doesn’t seem to get this. Thibeault would rather point to the simplistic argument of price gouging than to the realistic fact of resource limitations. And the NDP’s response to this situation has typically been to try to keep gasoline prices as low as possible (sometimes by outright capping gasoline prices) – a policy which would give a significant benefit to the rich in our nation (who drive a heck of a lot more than the poor do), while continuing to raise greenhouse gas emission levels. In short, the NDP just doesn’t have a clue about what needs to be done to help in the fight against climate change.

To wit, the NDP has taken a position on the East-West dilbit pipeline known as “Energy East” – a pipeline which will create significant capacity to transport diluted bitumen from the Alberta tar sands to a tidewater port for export (see, “Mulcair sticks with pipeline policy as report challenges Energy East”, the Globe & Mail, February 6, 2014). The NDP also has reversed itself on opposition to the Kinder Morgan Trans Mountain pipeline, which would see an existing pipeline twinned to carry diluents in one direction and dilbit in the other (see, “The Economic Case Against the Tar Sands, Part 2: Tom Mulcair’s Disastrous Kinder Morgan Reversal Opens the Door for the Green Party”, Sudbury Steve May, December 26, 2013). Both of these pipeline projects will facilitate the expansion of the tar sands enterprise – they will lock in future emissions of greenhouse gases, and continue to wed Canada to an unsustainable and economically dangerous fossil fuel resource future.

All of this is happening at a time when the world is finally waking up to the calamity of the climate crisis which is staring us in the face. But rather than embrace proven policies which will lead to real emissions reduction (such as a carbon tax), the NDP wants to leverage tar sands investment to power the renewable energy revolution in Canada. Friends – that’s just not going to work. As long as the tar sands are pumping out more and more oil, Canada’s renewable sector is going to be at risk – even with a price on pollution as envisioned by the NDP in the form of a cap and trade system.

Oh, and about that cap and trade system that the NDP wants to use to price carbon? Why on earth the NDP remains married to this policy I just don’t know. Cap and trade has been a proven failure throughout the world, with carbon markets collapsing, and offset trading negatively impacting indigenous peoples who lose access to lands which have become “carbon sinks”. If you set out to create a policy for reducing emissions which enriches bankers and big business at the expense of common people in the most opaque manner possible, you would arrive at Cap and Trade before too long. Yet that’s where the NDP wants to go.

I realize that we’ve moved a ways from flipping the switch to turn out the lights on a sign to critiquing cap and trade and pipeline policies – but the fact of the matter is all of these signs point to the NDP’s limited grasp of climate change, and what we need to do if we are going to have any hope at all of holding warming at 2 degrees Celsius.

In 2015, a much better option for Sudbury and Nickel Belt would be to say goodbye to Glenn Thibeault and Claude Gravelle and his ever-lit sign. Only the Green Party has a serious plan to shift Canada back into a leadership role on the climate crisis, both domestically and on the international stage. The NDP continues to prove that it is not a progressive party, and that it is little better than the Liberals or the Conservatives with is pro-tar sands growth policies.

If Claude Gravelle won’t turn out his lights by himself, perhaps Nickel Belt voters will do the job for him in 2015.

(opinions expressed in this blog are my own and should not be interpreted as being consistent with the views and/or policies of the Green Party of Canada)
Posted by Sudbury Steve at 8:10 PM

Need To Boost Your ClickBank Traffic And Commissions?