This may be problematic. Right now, at most downtown Sudbury intersections, pedestrian crossing signals are activated automatically when the lights change. This set-up is generally a good one for pedestrians, as there's no need to go hunting for a button to push before crossing. Buttons can be difficult to locate, or located in areas which aren't accessible for all pedestrians.

However, it seems that "beg buttons" are starting to pop in places where they've never been before, including Elgin and Ste. Anne Road, and most recently at Elgin and Elm Street. If this is the City's response to the recent rash of pedestrian collisions, many of which have happened in the downtown especially on Elgin Street - this is the wrong response.

Beg buttons make it more difficult for pedestrians - and easier for vehicular traffic. Besides issues of accessibility, what often happens with traffic flow is that a higher volume street will experience a longer duration for traffic - unless and until a beg button is activated by a pedestrian (see: "How 'Push-to-Walk' reduces the quality of walkable neighbourhoods," Transitized, December 30, 2012). Higher volume flow tends to mean greater rates of speed - which is something that our downtown certainly doesn't need more of, especially along Elm Street.

All of the good work that the recent Elm Street pilot parking project has accomplished could be wiped out by making the pedestrian environment along Elm and Elgin less friendly at the expense of moving motorized vehicles through the downtown more quickly.  Of course, the City's Roads staff have always been opposed to allowing on-street parking on Elm Street, out of concern that it would affect the flow of traffic.  A recent report showed that traffic in fact has been slowed travelling through this corridor - albeit only by about 24 seconds.  That's not nearly enough to have had a significant impact on Elm Street, in my opinion - it's still one of the least desirable streets for pedestrians in our core, although it has been getting a little better.

It may be that these Beg Buttons are showing up now because Roads staff are concerned that pedestrians aren't obeying traffic signals in the downtown core.  If you make someone press a button to cross the road, chances are they're going to wait for a signal that they themselves just activated.  But as far as safety goes, Beg Buttons just don't cut it, because ultimately they end up frustrating pedestrians who then in anger often cross intersections against signals (see: "Letter to Stephen Buckley, General Manager, City of Toronto," Walk Toronto, January 20, 2015).

Progressive jurisdictions are moving away from Beg Buttons. As a citizen and taxpayer in Greater Sudbury, I can't help but wonder why it is that we are seeing new Beg Buttons installed in our downtown core. 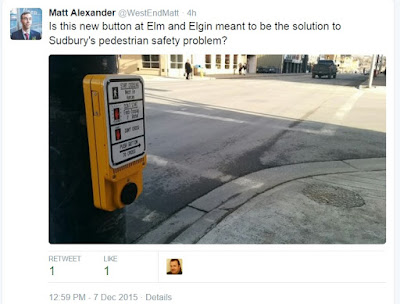 (opinions expressed in this blogpost are my own and should not be considered consistent with the policies and positions of the Green Parties of Ontario and Canada).

Thanks to Sudbury Move's Matt Alexander for much of the local information contained in this post.  You can find Sudbury Moves on YouTube at: https://www.youtube.com/channel/UCojhHCoETabtq_BHO39H2pQ

Posted by Sudbury Steve at 5:01 PM