Is the Province of Ontario Funding the Destruction of Species at Risk Habitat?

This is all happening in my community, the City of Greater Sudbury, through a contentious road-building project known as the Maley Drive Extension.  This road project has been on the City's books for over 20 years.  It was first subject to a Class Environmental Assessment in 1995, which looked at alternatives to building a new road (including light rail) to address what was then identified as growing concerns over congestion in the City.  Ultimately, the 1995 Class EA identified a favoured corridor for the Maley project - one which wasn't at that time impacted by the presence of species at risk. 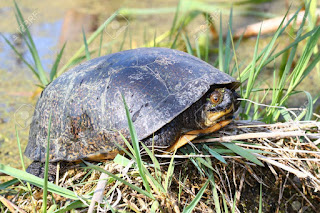 A few weeks ago, the public had its first opportunity to provide input specifically on the Maley Drive Extension project since June, 1994.  Immediately prior to the oral public input meeting, the City revealed the presence of species at risk in a location just to the west of the existing Barrydowne/Maley Drive intersection - smack dab in the middle of where the new Maley road is intended to be built.

The Need to Explore Alternatives to Destroying Species at Risk Habitat

According to the facts (of which there are few), the City is currently working with the Ministry of Natural Resources and Forestry to obtain an Overall Benefit Permit (to alter or destroy the habitat of species at risk) in order to allow the Maley Drive Extension project to proceed.  Apparently, the City of Greater Sudbury has known about the presence of these species at risk in the Maley corridor since 2013 (see page 24 of 29 of the "Maley Drive Extension - Phase 1 Business Case Report", City of Greater Sudbury, February 19, 2016 - specifically, Section 10.2 of the Report).

The City appears to have leapt to the conclusion that an Overall Benefit Permit is desirable for the Maley Drive Extension project, rather than first looking at and assessing alternatives for the project, including different solutions to tackle the so-called "congestion" problem (a "problem" other cities in Ontario would probably pay money to have), such as investing in transit, alternative transportation and the use of traffic demand management to achieve desired outcomes, or even just at different routes for the new road which would avoid the habitat of species at risk or have less of an impact.

The City really ought to have undertaken a new Environmental Assessment, once the presence of species at risk became known to municipal staff.  That approach, or providing a new addendum, is what's recommended by the Ministry of Environment and Climate Change in its "Code of Practice for Preparing, Reviewing and Using Class Environmental Assessments in Ontario, 2014" (see Section 6.2.10, Changing a Project After a Planning Process is Complete - which indicates that where a lapse of time between EA completion and project construction has occurred, and the environmental circumstances have changed, the results of the project review should be documented).  In this case, the 1995 EA included provisions for lapsing after 5 years.  The 2008 Addendum, prepared in part as a response to the lapsing of the 1995 EA (and in part due to the changing scope of the project) does not appear to have included a lapsing provision.  That might be important, because the Code of Practice refers specifically to lapsing, along with changed environmental circumstances.  The discovery of species at risk in the corridor by the City of Greater Sudbury in 2013 or thereabouts is clearly a "changed environmental circumstance", but if the 2008 EA Addendum has not lapsed, it may be that no further assessment of the project is actually required - even though the EA is woefully out of date, and species at risk were ultimately discovered years later, after two environmental assessments had been conducted.

We might soon find out what the Minister of Environment and Climate Changes thinks about the City's approach, however, as several concerned citizens have written to the Minister, urging him to require a new environmental assessment - one which looks at alternatives, and is based on up-to-date socio-economic and environmental conditions (see the letter beginning on page 79 of 104 of the City's public consultation summary for one example).

Without alternatives having been considered by the City, it seems premature to me that the Ministry of Natural Resources would entertain an overall benefit permit - which is kind of a last resort approach to "managing" species at risk habitat which may be impacted by an infrastructure project. At the very least, the City should be looking at re-routing Maley Drive away from the species at risk habitat.  However, ultimately, that's the Minister's call.  We'll see if the overall benefit permit is issued in accordance with the City's timeline (by September, 2016).

The City's Business Case Report refers to two "assessments" of the habitat which were undertaken in 2013 and 2014.  I've asked the City for copies of these assessments (the 1995 Environmental Assessment and the 2008 Addendum have been available to the public on the City's website for some time now), but I've been told that these two assessments aren't available to the public, because of sensitive information about species at risk.  At this time, it remains unclear to me whether these two "assessments" were conducted in accordance with the Class Environmental Assessment process, or whether they are just technical documents used in support of an overall benefit permit.  Given that they're not publicly available from the City, they are more likely the latter than the former, because Class Environmental Assessments are supposed to be public undertakings.

Did the Province Know about Species at Risk and Still Choose to Fund Maley?

What's also unclear is whether the Province was aware that they are intending to publicly fund the destruction of species at risk habitat in contravention of their own Endangered Species legislation.  At this time, it's my understanding that that the Ministry of Natural Resources and Forestry hasn't issued an overall benefit permit to authorize the destruction/alteration of species at risk habitat.  But that hasn't stopped the Minister of Finance from announcing in three budgets (2014, 2015 and 2016) that the Province will specifically fund the Maley Drive Extension to the tune of $26.7 million - or one third of the estimated $80.1 million costs of Phase 1 of the project (see: "Province offers Sudbury a plum budget," the Sudbury Star, May 2, 2014).

Did the province of Ontario know back in May, 2014, that the Maley Drive corridor which they committed to funding will obliterate the habitat of species at risk?  Or was the City of Greater Sudbury keeping this information secret from the province?  Either way, something isn't right here.  The City knew about the presence of species at risk at least since 2013.  The City claims that its been working with the Minister of Natural Resources and Forestry to obtain an overall benefit permit for the Maley project.  What's not clear is when the MNRF was notified of the presence of species at risk in the corridor - or if, after being notified, the Minister of Natural Resources would have shared this information with his colleague, the Minister of Finance.

What also makes little sense is once the Province became aware of the presence of species at risk in the Maley corridor, why did it continue to specifically identify the Maley Drive project as one to be funded in three consecutive budgets?  At the very least, the Province would have had to have been aware of this situation in 2016 - the City of Greater Sudbury made the information about the species at risk available to the public on February 19, 2016 - several days ahead of the February 25th budget announcement.  And of course, if the MNRF was earlier made aware through internal communications about species at risk - well, the province would have had this information available to inform budget decisions before February, 2016 - and quite possibly before the 2015 or 2014 budget commitments to Maley as well.

A Serious Commitment to Species at Risk?

I understand that there is a process in place to allow for the destruction of the habitat of species at risk through the issuance of an overall benefit permit.  But why would the Province choose to fund a road which it knew was going to destroy habitat before the requirements for a permit's issuance were fulfilled by the City?

Doesn't the Province take its own Endangered Species legislation seriously?  Anybody following the Maley Drive debacle could easily conclude that the answer is "no".  Why throw $26.7 million at a road that hasn't received all necessary provincial approvals related to species at risk? Or one that has an up-to-date Class Environmental Assessment, for that matter.

Of course, it could be that the Province was unaware of the presence of species at risk - and might have only found out about it for the first time just days in advance of the 2016 budget announcement. The City's Business Case Report is unhelpful with regards to the timing of the overall benefit permit process, except to say that it expects one to be issued by September, 2016.  It doesn't actually indicate that the City engaged the Ministry of Natural Resources and Forestry - it says only that the approval process has been "ongoing" - which might simply mean that the City is taking its time filling out the paperwork to apply for a permit.

The Liberal Record on Species at Risk

And what about the federal government? Well, they've not yet made a decision to pony up their one-third funding for Phase 1, so we'll have to wait and see whether Justin Trudeau's new Liberal government wants to be complicit in the destruction of species at risk habitat.  Judging by the press releases from Nickel Belt MP Marc Serre, though, I wouldn't bet on the feds sticking up for species at risk over giving the City the funds it needs to build Maley Drive (see: "Marc Serre, MP for Nickel Belt Urges Council to Help Him Move the Maley Extension Forward," Liberal.ca, March 15, 2016).  Serre must be well aware of the presence of species at risk habitat, although no mention is made of it in his press release.

So, one might conclude that Liberals at both the provincial and federal level of government are content to ignore the provincial Endangered Species Act, and move forward with the destruction of the habitat of species at risk.  Some might find that offensive - maybe even immoral.  I know that I do.  We're talking about the habitat of two threatened species here - species which the Endangered Species Act indicate should have the highest level of protection.  I get that the Province has developed a process to allow for habitat destruction in certain circumstances - but the idea behind the use of overall benefit permits is that they will be a last resort - used only after all other alternatives have been exhausted.

The City of Greater Sudbury hasn't looked at alternatives to Maley Drive since 1995.  Granting the City a permit to destroy the habitat of blanding's turtle and whippoorwill based on an assessment of alternatives more than two decades old would simply be egregious - and offer further evidence that Premier Kathleen Wynne's Liberal government just isn't taking the plight of threatened and endangered species seriously.

(Opinions expressed in this blogpost are my own, and should not be considered consistent with the policies and positions of the Green Parties of Ontario and Canada)
Posted by Sudbury Steve at 7:03 PM