You’ve probably heard it said that we can have both a healthy environment and a healthy economy. Usually, these words are spoken by environmentalists in response to those that claims taking meaningful action to reduce the impacts of climate change are too costly.   Of course, the costs of inaction are much higher – an estimated drain of between 5% and 20% of the world’s GDP annually, according to the seminal Stern Reviewof on the Economics of Climate Change (October, 2006).  That’s literally tens of billions of dollars per year taken out of the global economy.

We’ve known about the perils of climate change for decades.   And we’ve long known about what actions we will have to take if we are going to avoid the very worst impacts of a warming world.  There are many solutions, but only a few actions will deliver both the healthy environment and sustainable economy that the planet needs for human civilization to thrive. Finding the right balance is critical if we’re going to avoid collapse.  To strike that balance, we’ve got to wean ourselves off of fossil fuels.

Along with being a necessity, there is no denying that the switch to a low-carbon economy represents a clear and present threat to our current economic system – or rather, to those who reap the majority of the benefits of that system.  But our political elites can’t any longer ignore the calls made by the people for climate action, or the warnings made by experts on the long-term costs of inaction. 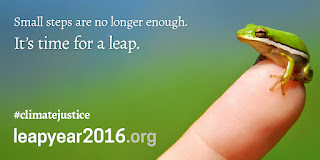 What may be flying under the radar, however, are similar calls which are being made to restructure our neoliberal economic system.  These calls are coming from people’s movements which have taken on many forms, from anti-pipeline activism to Occupy Wall Street to those calling for Fair Trade. In Canada, the authors of the LeapManifesto (September, 2015) made the clear and compelling connection between action on the climate crisis and economic reform. Experts, like Bank of England Governor Mark Carney, are warning governments and corporations of the dangers of both wealth inequality and catastrophic climate change (see:“Bank of England governor Mark Carney says climate change is an economic problem,” CBC News, July 15, 2016).

Calls for systemic economic restructuring are starting to resonate.  South of the border, both Republican and Democratic Party nominees support changes to the North American Free Trade Agreement (see:“Where Hilary Clinton and Donald Trump Stand on Economic Issues,” the Wall Street Journal, July 19, 2016 (updated July 27, 2016) . Both have said that they will not sign the Trans-Pacific Partnership (see:“Clinton’s TPP controversy: What you need to know,” CNN, July 27, 2016).

As with past climate change commitments, it’s difficult to take seriously statements made by the political elites who champion a neoliberal economic system completely at odds with ending inequality and slowing global warming.  Promises are made, but little action is taken – and what little is taken is largely ineffective.

The Leap Manifesto calls for an end to the economics of austerity, and for the emergence of the truly sustainable economic system that we need for a healthy planet.  But as long as political elites on both the left and the right continue to champion fossil fuel growth and neoliberal policies which enrich the wealthy at the expense of the rest of us, we’ll have neither the social and climate justice necessary for all of humanity to thrive.

Politicians need to read the writing on the wall, and understand that voters aren’t going to accept lip service in place of real action for much longer.

Posted by Sudbury Steve at 5:33 PM