Conservatives: It's Time to End Your Toleration for the Intolerable

Toleration – it’s a great thing.  Maybe it’s even a Canadian value.  But it’s not always ok to be tolerant, especially when what you are tolerating is something odious.  The Conservative Party of Canada is a big-tent national political party.  It is, for the most part, a pretty tolerant party.  Perhaps it is a little too tolerant towards those who promote their own brand of intolerance.  And that’s a problem for Conservatives.

Case in point.  In any other political party, an MP who expressed a clearly homophobic point of view – the desire to remove certain legal rights from people based only on their sexual orientation – well, that would be intolerable.  I can tell you that if a member of my own party were to express that kind of homophobic nonsense to me, I would be the first in line to petition my Party’s council to have that individual removed as a member.  Taking rights away from an identifiable group of people through discriminatory legislation – to me, that’s intolerable.  It’s borderline hate speech to advocate that sort of thing. 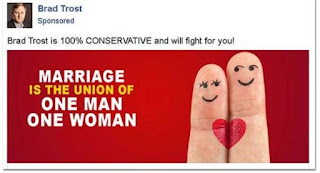 This past week, Conservative MP Brad Trost published a meme on Twitter in which he expressed that marriage is the union between a man and a woman, and that he would “fight for you” because he’s “100% CONSERVATIVE”.  I didn’t realize that being a homophobe was a specific criterion to prove one’s Con cred, but since I expect that many members of Trost’s own party were also unaware of that qualification, I’ll leave that aside for now.

What’s problematic here is that Trost – who isn’t just an MP, but also someone who has declared that he is running for the leadership of his Party – is actually in a unique position of power whereby he has the ability to introduce legislation and debate in parliament the merits of his homophobic screed.  Should he ever become leader of his Party, he may one day end up as Canada’s Prime Minister – although even I think that’s a long shot.

Let me be clear, Brad: Marriage in Canada is *NOT* limited to unions between a man and a woman. Marriage has as much to do with gender of the two individuals who engage in that act as their ethnicity or religion - which is to say, marriage has nothing at all to do with gender.

Can you imagine seeing a similar ad which reads, "Marriage is the union of one white person and another white person"?

I understand that the media may have had some questions for Mr. Trost along the lines of, “Does this homophobic meme mean that you’ll be trying to change Canada’s laws and maybe even the Constitution and remove the marriage rights that tens of thousands of Canadians currently enjoy just because you’re a homophobe?”

The CBC reports Trost’s campaign manager’s response: “[Mike] Patton [Trost’s campaign spokesperson] said Trost doesn't agree with the way parliament voted on same-sex marriage, but because a majority of MPs voted in favour of the change, he wouldn't take steps to reverse it.” (see: “Conservativeleadership hopeful Brad Trost draws ire for same-sex marriage ad,” the CBC, September 15, 2016).  This apparently after an earlier answer flirted with the use of the Constitution's "Notwithstanding" clause.

So, he’s not just a homophobe – he’s also apparently an unprincipled one.

And he’s running for leader of the Conservative Party.  So he’s accepting campaign contributions to produce ads which are homophobic in nature in order to raise awareness about his campaign – even though these ads are about issues which he lacks the courage of his own pathetic convictions to pursue.  I can’t help but wonder what Trost’s financial backers must think of this strategy – and whether it’s a good use of their money.

Members of the Conservative Party of Canada: are you really OK with this?  Do you believe that this is a wise use of public funds?  Do you agree that it’s ok for someone in your Party to promote homophobia through publicly-subsidized ads – in the midst of a leadership campaign, no less?


This would not be tolerated in any other mainstream Canadian political party.  Why is it ok that it’s happening in yours?  Please, Conservatives – find the courage of your own convictions and in the name of tolerance, get rid of Brad Trost’s brand of intolerance – while do all of us Canadian taxpayers a favour.

(Opinions expressed in this blog are my own, and should not be considered consistent with the policy and/or positions of the Green Parties of Ontario and Canada)

Note: an earlier version of this blogpost referred to tax receipts being given to those who donated to Trost's leadership campaign, as well as my opinion that this may have constituted tax-payer funded hate.  Since then, it has been brought to my attention that contributions to leadership campaigns at our federal level of government do not receive tax receipts. Even though the Conservative Party will undoubtedly spend money promoting (to a degree) Trosts's leadership through the use of taxpayer subsidized contributions (as the Party will do with all leadership contestants), my original blogpost drew a direct link between tax receipts and leadership campaigning, and was thus in error.  The case for taxpayer-funded hate speech remains, but clearly to a much smaller degree.  Trost's odiousness among his own Party was the primary emphasis of this post anyway - so I feel that the changes I've made here since its original publication do not detract from that primary thesis.

Posted by Sudbury Steve at 4:52 PM