This seriously ups the stakes with regards to recent turmoil within the Green Party related to accusations of racism, anti-Semitism and misogyny directed at the Leader of the Party by some members of the Party's Federal Council.

Noah Zatzman, a name many Greens will not be familiar with, was hired by Paul as a senior advisor, after serving as media consultant and strategist on her campaign team, according to iPolitics (see: "Hill Movers: Green Party leader announces new team; Bennett, MacAuley changes," iPolitics, November 12, 2020).  iPolitics also reports that prior to joining Paul's team, Zatzman worked as a senior advisor to Ontario Premier Kathleen Wynne. Zatzman appears to continue to occupy his position in Paul's office - or at least was firmly ensconced there as of April 21st, when he, described as a "spokesman", offered the media comment on how Green MPs would be voting on the federal budget (see: "Three confidence votes to determine fate of minority Liberal government," Red Deer Advocate, April 21 2021).

Zatzman's accusations have been floating around social media for the past few days, having apparently been originally made on May 14, 2021 via Facebook.  Interestingly, at that time, the Green Party had only released this rather anodyne statement about violence in Israel and Gaza, for which the Party and Paul received significant criticism from many who claimed that the statement did not go far enough to address the reality on the ground in the Occupied Territories, or in its representation of member-approved policy on Israel/Palestine (see: "Green Party Statement on violence in Israel and Gaza," May 10, 2021).

Shortly after this statement was released by the Party, Green MP Jenica Atwin condemned it as "totally inadequate".  Atwin, and Green MPs Paul Manly and Elizabeth May, each released their own, much more foreceful statements.  On May 13th, Elizabeth May raised these matters in parliament, clearly placing the blame for current violence on Israeli Prime Minister Benjamin Netenyahu's government and "extreme elements within settler groups" (see: "Elizabeth May: Canada must speak out clearly to defend the Palestinian people," Green Party of Canada YouTube Channel, May 13 2021). 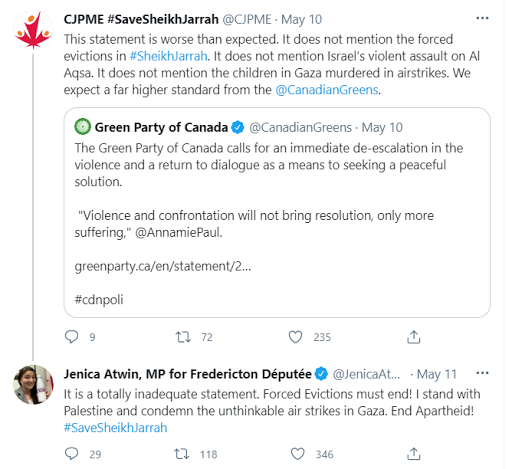 I agree completely, Steve. The party does not have the leadership it needs to move forward and, for the Greens, that could be the kiss of death. It's hard to fill EM's shoes.

I suppose it's an easier sell with the Lotus Eaters out here on the island.

it's the semantics of
" measured response " being missle strikes to a kids rock at a tank.
Misquoting and spin doctoring Hamas statements to portay them as evil and outright bad faith in the original "jewish land solution". Trail of tears people solution 3.0 ... palistinians just get out!
Maybe some day the world will give some land that some ancient tribe lost ages ago again ......look out Australia . Canada , America.. and then take their side when bubba losses his turnip patch and trailer to the expanding casinos.

This is part of Israel's scheme to dun anyone who is not 100% behind whatever nonsense that country gets up as it claims it is Zionist Judaism itself. Presumably because Zatzman heard some people being critical of Israel's stance of taking a sledgehammer to crack a nut over Gaza, he labels them antisemitic. A shallow ploy with ramifications.

The same kind of BS got Jeremy Corbyn dumped as leader of the UK Labour Party. Completely unfounded unmitigated horse manure. Israel plays for keeps and messes around with other countries politics. And all the fearful pols swear fealty to Israel. What a scam.

I voted Green last time around federally, and have been completely 100% unimpressed with Paul so far. She seems more like a municipal councillor than a country-wide leader. No sense of proportion or growing into the role. whatsoever. However, if they keep dopes like Zatzman around stirring up trouble like fake claims of anti-semitism forget any interest I have in supporting the Greens henceforth.