To: Mayor Brian Bigger and Members of Council, 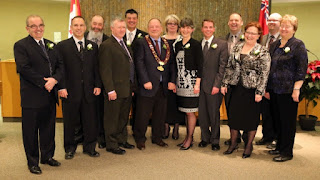 I am writing to you today with regards to the Maley Drive Widening and Extension project.  As you may know, I have written about this matter publicly through different media, including my blog (available at www.sudburysteve.ca – see below).

I have reviewed publicly-available information pertaining to this project, and I have noted how this project has changed in scope and scale over time. Based on the information recently provided to Council at its meeting of November 3, 2015, it appears that the changes made to the Maley Drive Widening and Extension project (“the project”) have never been approved by Council through by-law or Resolution.  As a result, the current version of the Maley project which is now proceeding should be discussed at the Council table and Council should make a decision whether to proceed with the revised project or not.

History of the Project – Scope & Scale

According to the 1995 Environmental Assessment, the Maley Drive project was originally proposed as:  a two-lane upgrade to the existing portion of Maley Drive between Barrydowne and Old Falconbridge Road, and a 4-lane upgraded road from Old Falconbridge to Road to Flaconbridge Road; the creation of a new two-lane road between Barrydowne and Lasalle Blvd; and an upgraded to Lasalle Blvd. rom approximately College Boreal to Frood Road (see page87, “Maley Drive Extension/Lasalle Blvd. Widening Municipal Class EA Addendum,” Earth Tech Canada, May 15, 2008).

A brief history of the Maley Drive project before Council is summarized here:


The Project Before Council

Since August, 2012, the Maley Drive project appears not to have returned to Council, despite significant changes proposed to scope, scale and costs.  Specifically, the project in 2012, according to the Report prepared jointly by the City of Greater Sudbury and AECOM, identified a 3-part phased approach to project completion, totalling $93 million in construction costs along with an additional $36 million in Associated Costs, for total project costs of $129 million.  Timelines for the completion of each phase were provided to Council in the August 8, 2012 Report prepared by David Shelsted, Director of Roads and Transportation Services. Timelines for completion of all 3 phases were estimated to be between spring 2013 and fall 2016.

The scope and scale of the Maley Drive project, the phasing of the project, and the project’s anticipated costs have all changed since the August 2012 phasing presentation and its endorsement by Council.  According to the series of documents submitted to Council on November 3, 2015, phasing for Maley Drive is now being considered in two parts, rather than three; and costs appear to have risen to over $150 million (up from $129 million in 2012).

With regards to phasing, Phase 1 of Maley Drive is now identified as being that section of Maley between approximately College Boreal on Lasalle Blvd. to Barrydowne Road, with the existing section of Maley to be “rehabilitated” between Barrydowne Road and Falconbridge.  It is unclear exactly what “rehabilitation” is to occur, but this “rehabilitation” will not include upgrading this stretch of Maley to 4 lanes as contemplated in the 2008 Environmental Assessment Addendum to the 1995 Assessment.

Significant Changes to the Project - Costs

That leaves the City of Greater Sudbury to find its one-third share of funding.  According to documentation available on the City’s website, the City currently has $12.2 million set aside for our one-third funding, and that options for financing will be presented to Council with regards to the remainder of the City’s one-third share ($14.5 million).

Phase 2 of the Maley project will consist of: widening Lasalle Blvd. between College Boreal and MR 35 (Elm Street); upgrading the recently rehabilitated section of Maley between Barrydowne and Falconbridge to 4 lanes, along with reconstructing a railway crossing in this area; and, installing roundabouts on Maley at Lansing, and on the newly built section of Maley Drive at Montrose.  Currently, costs estimated for Phase 2 total $70 million.  At present, there are no funding commitments from any level of government for Phase 2.

Given that the scope, scale, phasing and costs of the Maley Drive Extension and Road Widening project have changed significantly since August 2012 – the last time our Municipal Council affirmed its support for this project – it appears to me that the current version of the Maley project has not been one which has received Council’s explicit endorsement.

These changes to scale, scope, and phasing have led to a much different Maley project than what was originally contemplated by Council in 2009 at the time of initial requests for funding under Building Canada, and in 2011 when Council first identified Maley as it’s “No. 1 priority” project.  The phasing of the completion of the Maley project does not correspond to what was presented to Council in August, 2012.  And the costs of the current 2-Phase project have increased by approximately $30 million since 2012.

Not only has Council not authorized the phasing approach to the Maley project, it has not yet identified a means of funding for the entirety for our 1/3 share of funding for Phase 1 of the project, or how Phase 2 will be funded, if at all.

It is also entirely clear to me that the public at large have not been informed of what, exactly, the City will be getting for $80.1 million dollars – especially given the fact that at the time of the August 2012 resolution of Council, the Maley project in its entirety (from MR 35 to Falconbridge Road) was on the table and endorsed for completion by Council (albeit in 3 phases).

Given this information, I believe it is incumbent upon our Municipal Council to revisit its support for a significantly revised Maley Drive project – one now consisting of two phases (only one of which has funding committed).  Council should review new assumptions with regards to whether this phased approach to funding makes sense, especially given the fact that some of the work scheduled to occur in Phase 2 will be on that part of the roadway intended to be built at the time of Phase 1.

Council should ask whether or not it would make more sense to build the road right the first time, rather than returning to re-do the road at some point in the future.  Council should also determine whether Phase 1 continues to make sense given that 4-laning of the existing Maley Drive between Barrydowne and Falconbridge, along with grade-separation to the existing railway crossing, will only occur at some point in the future, presuming that funding should be available for the estimated $70 million in costs.

Council may also wish to consider the need for this project in its entirety, given much of the criticism which has been made in the public realm with regards to the project, along with the lack of benefits to the City of Greater Sudbury identified in the recently completed “Cost-Benefit Report” by AECOM (while monetized benefits for Maley Drive were identified by AECOM, they almost entirely will accrue only to owners of motorized vehicles, with the lion’s share going to the trucking industry – no monetized benefits to the municipality were identified in this report).

Council may also wish to consider whether proceeding with a road project of this scale based on an Environmental Assessment report prepared in 1995 and updated in 2008 continues to make sense, as it is probable that many of the assumptions related to growth and development at these times will have changed over the past 20 years.

What is clear is that our municipal Council has never authorized the Maley Drive Extension and Widening project as it is presently contemplated.  As elected officials I believe that it is incumbent upon Council to provide – or not provide – a social license for this project through a further resolution of Council.  Indeed, this matter should have returned to Council some time ago, prior to changes being made to the project’s phasing.  Why Council was not requested to endorse this revised project is unclear, especially given the resolutions of Council from 2009, 2011 and 2012.

I sincerely hope that Council brings this revised project forward for discussion and decision in the very near future – and that the City keeps the public informed with regards to what, exactly, the Building Canada funding application for a portion of the Maley Drive project is expected to cover.
Sincerely,

“Some Initial Observations on the New Cost / BenefitAnalysis for the Maley Drive Extension,” Steve May, November 3, 2015.

“Maley Drive: How Not To Do A Cost-Benefit Analysis,” Dr. David Robinson, Economics for Northern Ontario, November 6, 2015.

(opinions expressed in this blog are my own and should not be considered consistent with the policies or positions of the Green Parties of Ontario and/or Canada)
Posted by Sudbury Steve at 8:45 PM